​​​​​THEN ONE OF THEM, WHEN HE SAW THAT HE WAS HEALED,TURNED BACK, PRAISING GOD WITH A LOUD VOICE; AND FELL ON HIS FACE AT JESUS' FEET, GIVING HIM THANKS.

We continue to be awed by God's providential care as we move closer to our goal of establishing a place of respite and spiritual refreshment for the weary traveler in this turbulent world.

With the invitation of Archbishop Jose Gomez in September of 2007, we began to pursue the possibility of establishing a new foundation in San Antonio.  St. Anthony was a great friend to us during our months of prayerful discernment.  Our now perpetual novena in his honor was answered with many confirmations that God was indeed opening the doors for us to begin a monastery in Texas.  In February of 2008, we received from the Vatican the final permission needed to embark on this new chapter of our lives:  founding a monastery under the patronage of St. Michael the Archangel.  Arriving in San Antonio, August 11, 2008, the Feast of Our Holy Mother St. Clare, we began our new mission in our temporary "monastery", a house very generously lent to us by Fr. Christopher Phillips, pastor of Our Lady of Atonement.

​Since our arrival in San Antonio the Lord has surprised us with many new and unexpected opportunities to evangelize.  In 2012, responding to the signs of the times, we started a blog, Quidnunc, to help present the only real answer to the culture of death:  the beauty of truth found in the Church's teachings.  Seeking to help support ourselves, and assist in the funding of our future monastery, 2012 saw the launch of Nonnavita, our line of organic soap.  In 2013 we began a weekly live radio program, A Good Habit, which airs on the Guadalupe Radio Network.

It was Mother's prayer that many foundations would eventually be made from Our Lady of the Angels Monastery.  Blessed with many vocations, OLAM was able to send sisters to assist in reopening our cradle monastery in France, and to our Portsmouth, Ohio monastery (now relocated to Charlotte, NC), as well as to establish two foundations, one in the Phoenix Diocese in 2005, and ours in 2008.

Our Order, the Poor Clares of Perpetual Adoration, was founded in France the very day that Pope Pius IX proclaimed the dogma of the Immaculate Conception in 1854.  Our contemplative Eucharistic life in a spirit of thanksgiving is our particular way of carrying out the Church's vocation of praise, thanksgiving and love.  Our vocation of perpetual adoration gives witness to the primacy of God.

Mother Marie Claire Bouillevaux, our Foundress, under the guidance of a Franciscan Capuchin priest, Father Bonaventure Heurlaut, desired to begin an order which unites the Franciscan form of living the Gospel with a special devotion to Eucharistic adoration in a spirit of thanksgiving.  Mother Marie Claire was inspired by the account of the ten lepers in Luke's Gospel, which concludes with the words of Our Lord, "Were not ten made clean?  Where are the other nine?"  Mother Marie Claire wrote, "Is it not right then that His Eucharistic love should be glorified by unremitting thanksgiving?"  Thus, the motto, "Adoremus in Aeternum Sanctissimum Sacramentum" (Let us adore for all eternity the Most Blessed Sacrament) has been part of our tradition since the beginning of our Order.

From its beginnings in Paris, our order spread to Poland, Austria, America, Bangladesh, India and Japan.  The first American foundation was established in Cleveland, Ohio in 1921 by Mother Agnes from Austria.  This monastery became one of the first cloistered communities in the United States to receive the privilege of solemn vows.  From the Cleveland monastery have sprung many other foundations, most importantly for us the monastery founded by Rev. Mother Mary Angelica in Alabama in 1961.

To fulfill a promise made to God, Mother Angelica sought to establish a monastery in the south, which came to fruition in the Birmingham diocese when she and four other sisters founded Our Lady of the Angels Monastery in the city of Birmingham.  Some twenty years later, with yet another inspiration from the Holy Spirit, Mother founded the Eternal Word Television Network, whose mission it was to reveal the treasures and beauty of Holy Mother Church.  With a hunger to evangelize fueled by her love of the Blessed Sacrament, she wanted all to know that holiness is attainable for everyone, from the ditch digger to the CEO, from the mailman to the university professor.

Mother knew this holiness could only come from the acceptance of God's transforming love for each and every soul.  "And we, with our unveiled faces reflecting like mirrors the brightness of the Lord, all grow brighter and brighter as we are turned into the Image that we reflect."

As Poor Clares of Perpetual Adoration we live a life of praye​r and work which revolves around Jesus in the Blessed Sacrament.  It is His Presence that has brought us together in community.  Just as the Eucharist is the heart of the Church, so too He is the heart of our vocation as PCPAs.  In the final years of his pontificate John Paul II wrote much about "contemplating the face of Christ with Mary."  With Mary, the perfect disciple and preeminent adorer, we gaze in loving adoration upon the face of Jesus, veiled beneath the appearance of Bread. 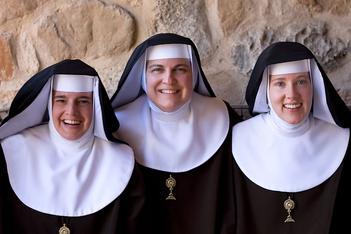